What’s better than winning a medal at an Olympic Games? Doing it with one of your best friends!

Figure skaters Adam Rippon and Mirai Nagasu led the U.S. team to bronze at the 2018 Winter Olympics, and the win is extra special for the longtime skating buds.

“We’re roommates here, staying at the Olympic Village,” Rippon, 28, told NBC Olympics. “We gave each other a hug and I said, ‘You know, Mirai, we’re here! We did it!’ ”

Nagasu, 24, made history on Monday when she became the very first American female to land a triple axel at the Olympics.

“I love my girl and so proud of her tonight,” Rippon said of Nagasu’s performance. “I’ve been waiting for this my whole life, then to see my friend go out there and skate like that is even better.”

Meanwhile, Rippon captured the internet’s heart thanks to his attention-grabbing free skate in the figure skating team event.

Four years ago, Adam Rippon and Mirai Nagasu were eating hamburgers on a rooftop after missing the #WinterOlympics.

The two have become fan-favorites at the Games, with Nagasu drawing kudos from figure skating icons, and Rippon striking internet fame. But just four years ago, the friends found themselves in tears after they narrowly missed an opportunity to participate in the 2014 Sochi Games.

“Four years ago, we got In-N-Out . We went back to her house,” Rippon recalled to NBC. “We climbed up to the roof of her house and we were eating In-N-Out because we were so upset that we weren’t at the Olympic Games.”

The athletes sported wide smiles as they appeared on NBC with the medal. In a gif, Nagasu and Rippon are shown gushing over the win. Nagasu quote tweeted the post on to her account, writing, “Omg we need a new emoji for whatever I’m doing.”

The pair also share a celebrity fan: Reese Witherspoon. The Oscar-winning star called Rippon “Reason #1” to watch the Olympics, just before the Games kicked off last week. Rippon playfully noted that “I want to make Reese Wtherspoon proud” in an interview after his skate. She responded Monday morning to confirm that he indeed makes her “so proud.”

Oh @Adaripp ,you make me so proud ! Keep making us all so happy! https://t.co/XXzaXDpUAG

The actress also traded tweets with Nagasu after the skater landed her history-making jump Sunday night, calling her “MY hero !!” after Nagasu noted that she watched the Witherspoon flick Home Again on the way to the Olympics. “I know it’s a movie but I wished you were my mom. You’re my hero.”

The friends appear to have been enjoying their Olympics stint from the start. Just before Team USA marched out into the PyeongChang Olympic Stadium, Rippon was shown planting a kiss on Nagasu’s cheek in a Snapchat video.

Smooch there it is!

Amy Schumer and chef Chris Fischer made their relationship social media official on Sunday, with a kissing photo on Instagram.

“Happy Birthday @theellenshow thank you for having us!” the 36-year-old actress wrote alongside a romantic black-and-white picture of the pair sharing a smooch, which was presumably taken during taken during Ellen DeGeneres’ star-studded birthday bash on Saturday.

The TV host, who celebrated her 60th birthday on Jan. 26, recruited some of her famous friends to mark the milestone this weekend — and, luckily, there was a photo booth on-site to document it all.

RELATED VIDEO: Amy Schumer Buys $2,000 Mattress for Store Employee Who Let Her Use the Bathroom

Relationship rumors began swirling around Schumer and the chef and cookbook author after they were photographed together in November of last year, chatting over a dinner in N.Y.C. At the time, Schumer’s rep declined to comment on whether their relationship was romantic.

The pair were most recently spotted together in New York in January, as they arrived at NBC Studios to watch Saturday Night Live, which marked only the second time they had been seen in public together.

Fischer lives on Beetlebung Farm in Martha’s Vineyard, where he grew up and wrote the James Beard Award-winning Beetlebung Farm Cookbook. His restaurant Beach Plum was touted by Esquire magazine in 2013 as a favorite of Barack and Michelle Obama.

Schumer previously split from Ben Hanisch in May of last year. The two were together for over a year and met on a dating app around November 2015.

On Saturday, Rob Kardashian — who shares his 1-year-old daughter with ex Blac Chyna — shared a series of photos of Dream hugging North, 4.

Each dressed in their pajamas — with Kim Kardashian West and Kanye West‘s oldest wearing a cream-colored fluffy robe and matching slippers —the two girls looked cute as can be.

He tweeted as second pic, which showed Dream holding North even closer, with a simple message: “Awwww.”

Want all the latest pregnancy and birth announcements, plus celebrity mom blogs? Click here to get those and more in the PEOPLE Babies newsletter.

The youngest Kardashian has been keeping a low media profile in the wake of his explosive social media tirade against his ex-fiancée and mother of his child this past summer.

The last time his followers caught up with him was in mid-January when he shared videos of his daughter during some bonding time as she sucked on her purple bottle and moved to the dance music playing in the background.

He added some kiss emojis emanating from Dream’s head like a halo.

“He only cares about and loves spending time with her, but that’s about it,” an insider told PEOPLE in December. “He doesn’t seem excited about anything else.”

On Jan. 1, Kardashian denied the assault claims brought against him by Chyna who accused him of physical abuse in April.

Nothing compares to locking eyes with your soon-to-be-husband for the first time on your wedding day!

In an exclusive clip from Sunday night’s episode of Sister Wives, Mykelti Brown reveals just how excited she was for Antonio Padron to see her for the first time on their big day.

“I’m very excited for Tony to see me,” she says, adding that her her then-fiancé had “really loved seeing me” in her wedding dress when she had first tried it on.

But even though he’d technically already seen his bride-to-be in her white dress, Brown explains that “now it’s different” because the pair would both be “all dolled up” and full of pre-wedding excitement.

Although it’s tradition to wait to see the bride for the first time until she’s walking down the aisle, the couple decided to share that special moment with each other before the ceremony took place.

While Padron stands outside with his back facing his soon-to-be wife, Brown comes up behind him and tapped him on the shoulder, her face flushed with excitement.

“Oooh, hey babe,” he says as he turns around and immediately embraces her. “You look nice.”

And Brown can’t stop giggling as Padron continues to gush over just how good she looks.

“Do I get to kiss you now?” he finally asks.

Brown, 20, and Padron, 23, got married in December 2016 after announcing their engagement that June.

More than 400 guests attended the ceremony — including all 23 members of Brown’s family — held at the Bloomington Country Club in Utah followed by a Mexican vintage-themed reception.

Right now if you want financial guidance and planning help you basically have two options – shell out thousands (or more) a year for an old-school Wall Street-affiliated advisor, or test your luck with one of the free financial planning chatbot startups that have been popping up over the past few years. Neither of these are ideal for most people; traditional advisors give good advice but… Read More 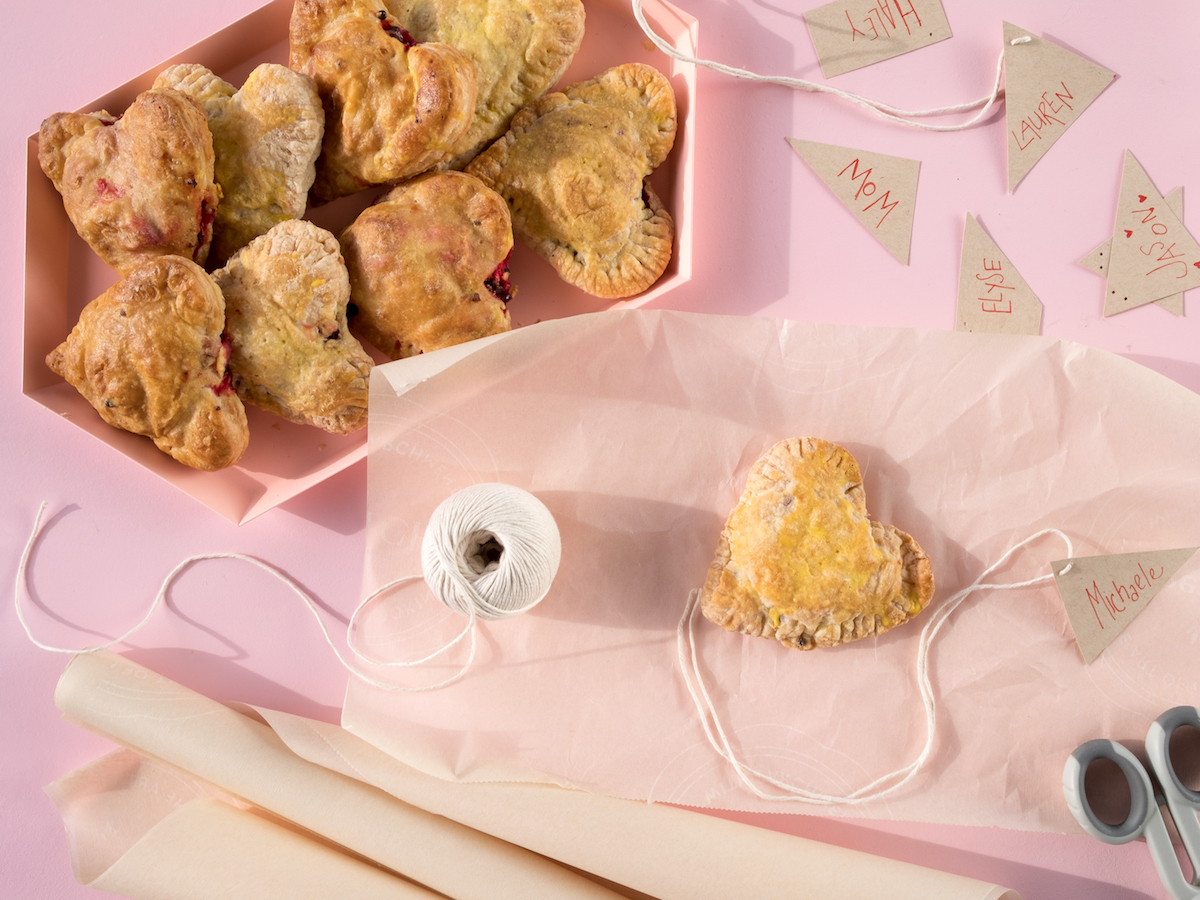 Mackenzie Anne Smith is a woman after my own heart. What makes us kindred spirits, you ask? It’s simple: our shared belief that everything tastes better with a carby starchy doughy element. While I’ve perfected the art of eating things-stuffed-in-pastry (or, pocket foods as today’s guest would say) Mackenzie has mastered the art of actually making them on the website she co-founded with Lauren V. Allen, The World in a Pocket. She joins us today with a delicious recipe that’s perfect for Valentine’s Day. From Mackenzie: My friend, Lauren, and I have an ongoing series we call “Put that in your Pocket”, where we talk about how we root through our leftovers and put them into pockets. Dumplings, hand pies, wraps –– you name it, we will stuff the contents of our fridge into a pocket and celebrate the process. A quick survey of the bits and bobs from the past week and into the …see the slideshow here