State prisoners in Michigan would no longer rely on scandal-plagued for-profit vendors to feed them under the budget Gov. Rick Snyder (R) proposed Wednesday.

Snyder’s FY2019 budget plan adds $13.7 million in Corrections funding to move prison food service back into public hands. It is a dramatic reversal for Snyder, who initiated the privatization of the prison food system in late 2013.

Snyder’s move to hand prison kitchens over to profit-seekers placed an inherently public duty — adequately and safely feeding the incarcerated — at odds with the shareholder-service ambitions of the vendors he put Michigan into bed with.

“We’ve worked with a couple of different private vendors,” Snyder said, according to the Detroit Free Press. “The benefits of continuing on that path don’t outweigh the costs and we should transition back to doing it in-house.”

This is a grave understatement. Michigan’s first prison food contractor was Aramark, a company most Americans only encounter when they get a hot dog at a baseball game or go to a college dining hall for lunch.

Aramark repeatedly failed to provide the minimum caloric nutrition required by the contract Michigan gave it. Underfeeding prisoners should be scandalous enough on its own, but Aramark was also given to more flamboyant transgressions of prisoner rights.

It served maggot-ridden food to inmates. One of its employees knowingly ordered workers to serve meat that had thawed in a broken freezer for days. Another had staff pluck rat-bitten snack cakes out of the trash can, spread frosting over the tooth marks, and serve them.

When the company’s staff weren’t underfeeding people with dangerous and contaminated food, they were breaking prison rules. Some were caught smuggling contraband. Others were caught having sex with people serving prison sentences.

Michigan eventually yanked Aramark’s deal. But Snyder wasn’t yet convinced that such failures are a predictable byproduct of the corner-cutting incentives of privatized public service. His administration explicitly said it was terminating the deal for cost reasons and not due to Aramark’s dangerous and inhumane food provision work.

Almost immediately, he hired a different company called Trinity to smooth out Aramark’s rough places. Trinity didn’t. Prisoners in Michigan were once again expected to accept insufficient and tainted food. Maggots showed up on cafeteria trays again. Aramark had had 186 staffers banned from prison grounds for violating various rules about inmate contact and security protocol. Trinity managed to get 176 staffers banned for similar misconduct.

None of this should have been surprising. Privatization of public duties is a bad gamble in almost every case — whether it’s a toll bridge or a parking meter system or the more viscerally human question of what people doing hard time should be expected to put in their bodies.

Handing the keys of a public problem over to profit-driven penny-pinchers almost always delivers a worse outcome for the public than paying an in-house workforce. Performing public services with public employees also keeps taxpayer money involved inside your local economy rather than shipping large chunks of it off to distant corporate accounts.

Snyder may have been slow on the uptake here, but the proposal to re-invest in professionalism and purpose-driven service is a welcome change for the many organizations that have sought to bring attention to the system’s abuses.

“The abuses and waste that have resulted from these contracts have endangered corrections officers, prison employees, and prisoners. It’s about time Snyder showed some common sense and took our advice,” said Lonnie Scott of Progress Michigan, which helped expose early failures in the Aramark deal.

“It’s time to return this service back to public employees and out of the hands of out-of-state corporations.”

In an attempt to pressure the federal government to extradite his predecessor — and to get about $41.5 million he said was promised to him — Javier Corral led an unprecedented caravan across Mexico just five months before a presidential election.

The governor of one of Mexico’s 32 states notched a small win in the fight against corruption in his country this weekend after a caravan he organized drove more than 2,000 miles to demand his predecessor stand trial. 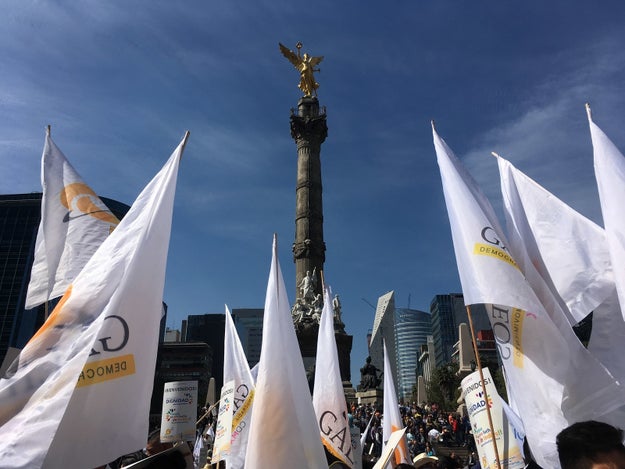 Chihuahua state Gov. Javier Corral crisscrossed the country over the course of three weeks in what he called the “Caravan and March for the Dignity of Chihuahua.” During the 28-city trek, Corral said that Mexico still operates like a kingdom, where President Enrique Peña Nieto spoils his favorite governors and punishes the rest.

Corral, who belongs to the National Action Party, or PAN, took office in 2016, wrestling control of the state from the ruling party for the first time in nearly two decades. 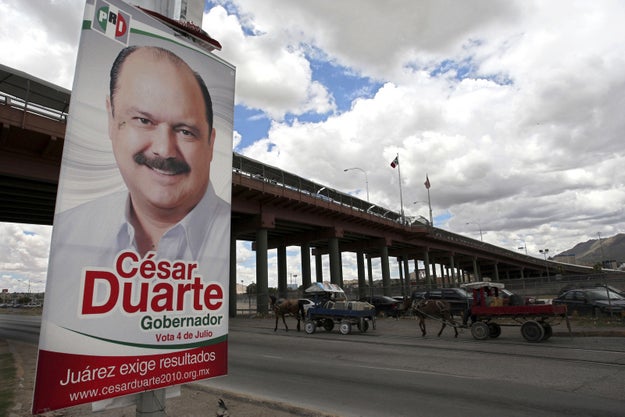 He immediately launched an investigation into whether former Gov. César Duarte, who governed Chihuahua from 2010 to 2016, diverted public money to Peña Nieto’s electoral campaign.

Mexico has been hit by a seemingly endless string of corruption scandals during Peña Nieto’s tenure, a fact that’s been on people’s minds as 2018’s presidential election approaches. 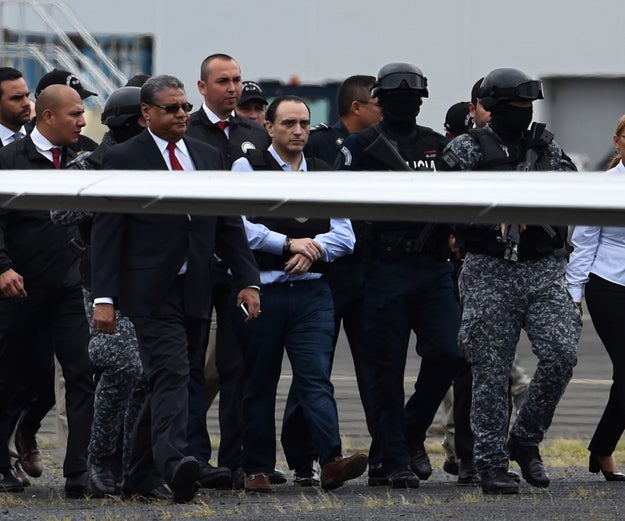 Duarte is one of four former governors belonging to the ruling Institutional Revolutionary Party, or PRI, who were arrested last year. In December, Alejandro Gutiérrez, a former PRI official, was arrested as part of an investigation into whether the party funneled millions of dollars from state coffers to its gubernatorial candidates in 2016. Gutiérrez is currently sitting in a prison in Chihuahua state.

Duarte went on the lam shortly after his term ended. 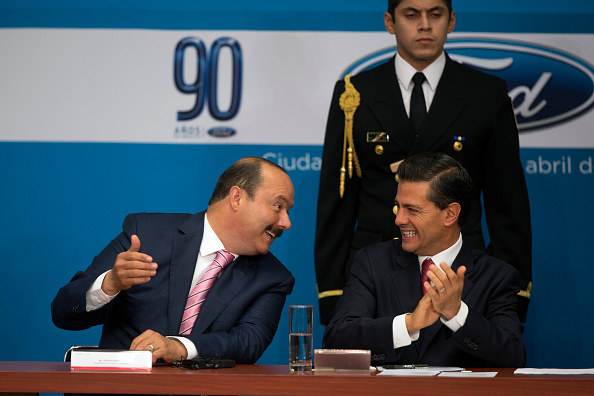 Corral, who believes Duarte has escaped to the US, has accused the federal government of withholding millions of dollars needed to pay public servants’ salaries as punishment for supporting the corruption inquiry.

Last month, federal authorities announced that they were taking over the Duarte corruption case — prompting fears that the case would stall. 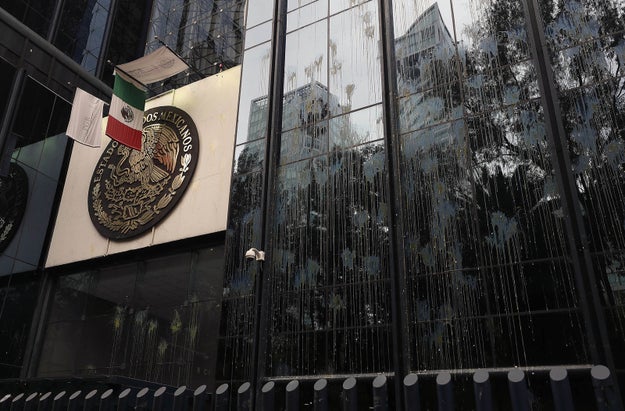 Corral said that the move was a way for Peña Nieto’s government to simulate progress on the case publicly while blocking it behind closed doors.

Riding a wave of disenchantment and frustration felt deeply across the country, Corral announced the launch of the “Caravan and March for the Dignity of Chihuahua.” 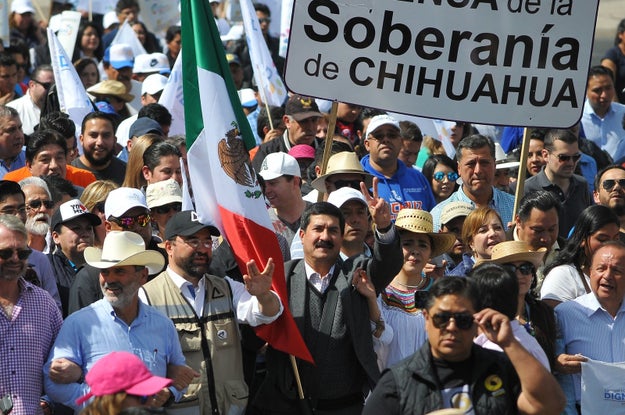 The caravan left Ciudad Juarez, on the US–Mexico border, on Jan. 20 and arrived in Mexico City on Sunday.

The PRI in response accused Corral of using public funds to finance the caravan. 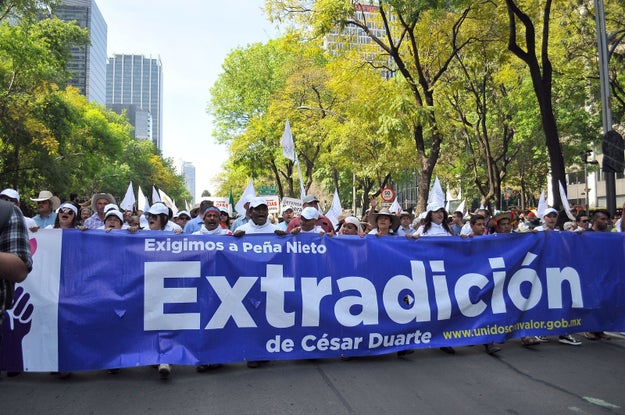 According to their accusation, the caravan is being used to prop up Corral’s party’s presidential candidate, who trails the frontrunner for July's presidential election, Andrés Manuel López Obrador, by 6%, according to a recent poll.

But the day before the caravan concluded, Corral and the federal government reached a deal that would get Chihuahua its funds — at the cost of transferring Gutiérrez to a federal prison. 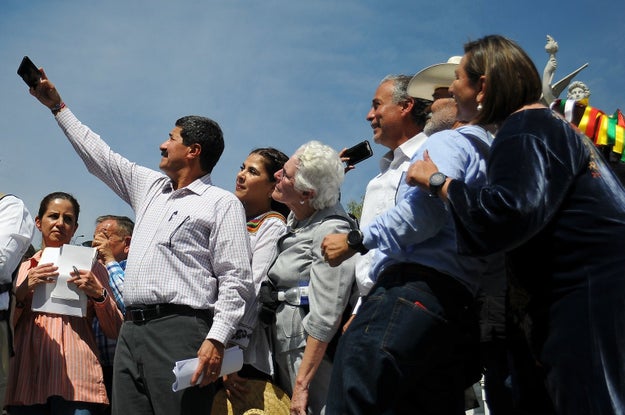 Details of how the deal was reached aren't clear, but the two sides announced that the federal government would push for Duarte's extradition and transfer $48.5 million to Chihuahua’s state coffers in exchange for Gutiérrez. People accused Corral of trading in a key suspect in the corruption case for money. “This is pure propaganda” for the PRI and the PAN, said López Obrador.

Though he may have accomplished his short-term goals, Corral isn’t finished. Speaking before a crowd of supporters near downtown Mexico City on Sunday, he announced that he will help organize a national movement against political corruption. 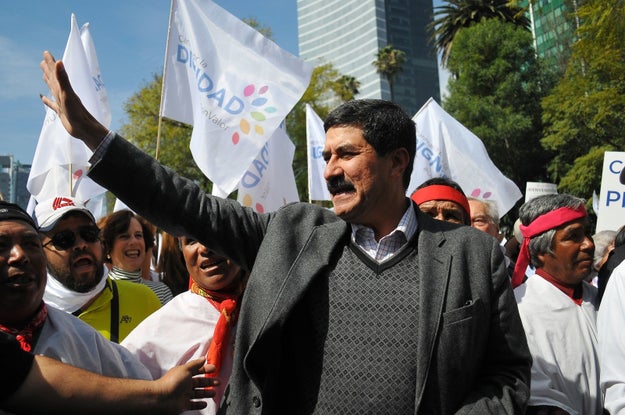 “We wish, with all our heart, that Mexico is able to get what Chihuahua just accomplished.”