Teenage snowboarder Chloe Kim’s mom is showing off her Olympic pride in style.

Boran Kim posted a photo to Instagram on Sunday of the patriotic fingernail art that she’s sporting in support of her 17-year-old daughter: an American flag on her left forefinger and a Korean flag on her right, a nod to the teen’s dual heritage.

“Ready to watch Chloe NAIL it! :)” Boran wrote in the caption, prompting a sweet comment from Chloe, who wrote: “my mama is the cutest!”

A California native who took up snowboarding at 4 and who won’t turn 18 until the spring, Chloe is widely expected to earn a spot on the podium in the Winter Games’ snowboard halfpipe later this week.

She will compete in a qualifying run on Monday, in the mountains of Pyeongchang, South Korea.

The combination of her youth, her SoCal-inflected personality and her dominant athletic ability has made Chloe one of the American stars of these Olympics, only a few days in.

At a news conference last week, after she arrived, journalists thronged around her.

“I think … wooo,” she said then. “It’s kind of crazy. I think this is the craziest place I’ve been so far, just all of these cameras and like the media village days, too, have been pretty crazy, but it’s all part of the experience.”

She is joined in Pyeongchang by her parents, who immigrated to the U.S. from South Korea more than 20 years ago. Chloe previously told PEOPLE she feels she can “represent both Korea and America.”

At a practice on Saturday, Chloe was watched by her dad, flashing him a big smile at the end of each run.

“My parents are really excited about it, and it’s some crazy luck that my first Olympics are going to be in Korea where my parents are from,” she said in the fall. “And a lot of my relatives over there have never really seen me compete before, so I think it’s going to be pretty cool for everyone. 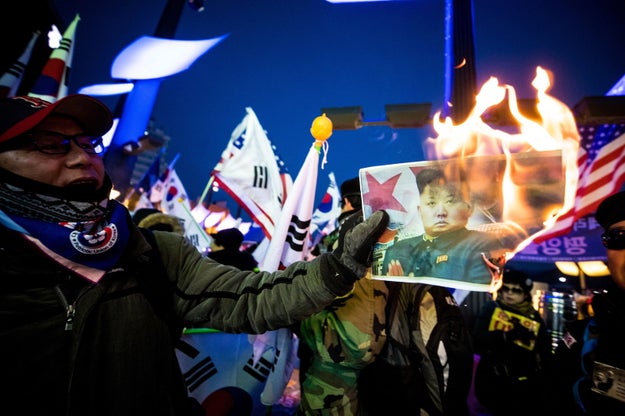 PYEONGCHANG, South Korea — One of the central focuses of the 2018 Winter Olympics’ opening ceremony on Friday night was harmony on the Korean peninsula. In front of an estimated 35,000 spectators in the stands, in frigid conditions, South Korean women's ice hockey player Park Jong-ah and North Korean player Jong Su Hyon brought the Olympic flame up the flight of stairs to the Olympic cauldron.

A small but rowdy group of several dozen anti-unification activists gathered on a street corner across from the Olympic Stadium in Pyeongchang, clashing with police as they attempted to burn photos of North Korean leader Kim Jong Un. On three different occasions, police had to rush into the crowd and remove someone trying to get their lighter to work in the freezing temperatures. On the third attempt, when the lighter finally caught, police swarmed the demonstration, effectively ending it. 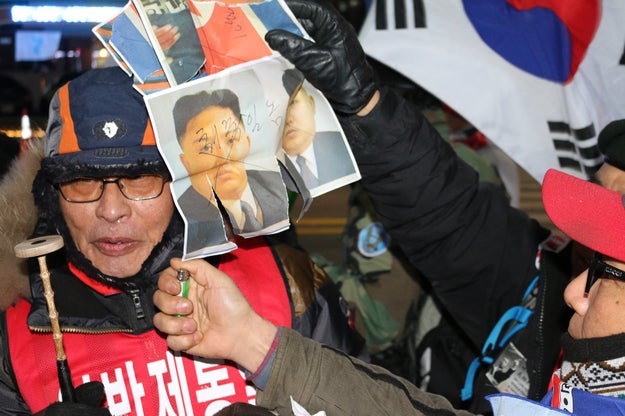 The protest was another in a series of demonstrations that have been happening all across South Korea in the weeks since it was announced that the two Koreas' women's ice hockey teams would be competing as a unified Korean Olympic team.

“The fact that North Koreans are coming down here is deplorable,” Nam In-soo, the president of the Freedom Korea National Defense Corps, the group organizing the bulk of the anti-unification protests, told BuzzFeed News Friday night. “The fact that Koreans have been preparing for this event for more than 10 years, and the Moon Jae-in government should really listen carefully to Korean people about hosting this Olympics.”

When they learned that BuzzFeed News was an American outlet, the FKNDC members began chanting, “Trump! Trump! Trump!”

“We want President Trump to bomb the shit out of North Korea,” Nam said. “North Korea has continued their provocation after the end of the Korean War, so we can't believe them.”

The FKNDC members, who traveled over five hours from Pohang, a city in the south, to voice their outrage over unification, were a small group of older and largely right-wing activists. But their views aren’t actually in the minority right now — according to recent polls, 50% of South Koreans oppose the unified flag. And another survey carried out last month found that the majority of young people in South Korea don’t like the idea of both Koreas sharing the same Olympic team. 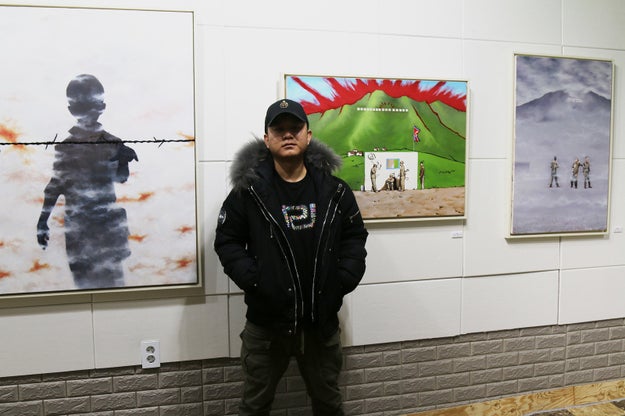 Kang Chun-hyok, a North Korean defector turned rapper and artist, stands in front of three of his pieces on exhibit at his Ants Gallery in Seoul, South Korea, last week.

A week before the opening ceremony, Kang Chun-hyok, a North Korean defector turned artist and rapper, told BuzzFeed News that he thought the unified teams were sort of a PR stunt.

“It will add to more confusion in South Korean society, and it will be used politically eventually,” he said.

Kang escaped North Korea with his family over 10 years ago, and he gained national recognition in South Korea when he performed on the talent show Show Me the Money. In addition to rapping, he’s also an artist, and his art gallery in Seoul held an exhibit last week that featured six of his pieces along with works created by other North Korean defectors.

“I think North Korea is taking advantage of the Olympics,” he said. “It is good to see a united team, but it is being used politically after all, isn't it?”

He said the whole thing reminded him of a line from a South Korean film called Steel Rain. “There is a famous line that is really touching for me: ‘People of a divided country suffer more from those who use the separation for political advantage, rather than the division itself. It is the reality of division and real pain.’” 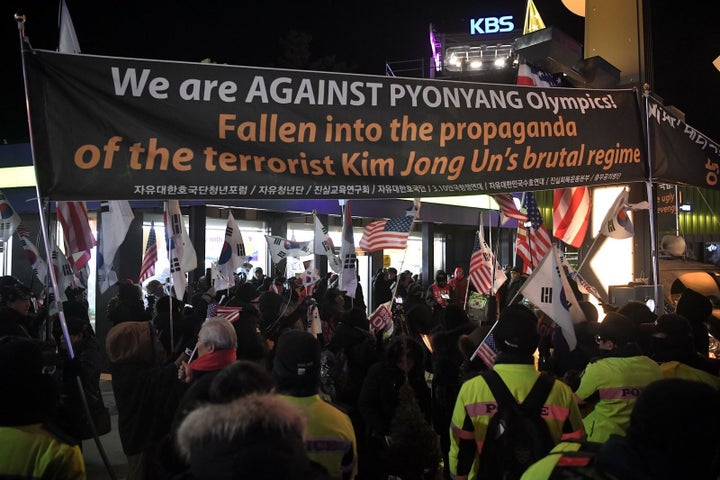 Protesters outside of the Pyeongchang Olympic Stadium raise banners that read “We are AGAINST PYONYANG Olympics!” on Friday night.

The FKNDC and other groups may have seized the combined team as an opportunity to protest, but they didn't appear to be winning over many converts from their position outside the Olympic venue. A young man named Na Byung-joon, who had come up from Seoul to see the ceremony, told BuzzFeed News on Friday that the team was actually pretty cool.

“I'm feeling pretty positive about the combined team,” he said. “I think it's a really good thing long-term.”

Na also said he wasn’t really a fan of the conservative protesters demonstrating in the area.

Blurring the line further, a member of a different anti-Olympics activist group said he actually liked the idea of the Korean peninsula team. Lee Gyung-ryul, a protester with No Olympics Anywhere, said he thought the way the Korean government combined the teams was a little haphazard, but was happy they did it.

“I think it's significant that for the past 10 years, both sides of Korea have not been involved together in any sports events,” he said.

When asked about whether he thought it was weird to be against the Olympics altogether, but be proud of the combined team, he agreed it was weird. “We've actually been discussing that within our organization,” he said.

“I cannot believe it. I’m shaking right now, maybe from the cold, or from the excitement, I don’t know,” he told reporters after finishing his third run in the men’s slopestyle snowboarding event on Sunday. “But I’m ecstatic.”

Appearing in his first Olympics, Gerard had a spotty performance in the first two of his three runs — falling in both — but under the rules of the event, one great run was all he needed. And that’s what he delivered in his final time on the snow, earning an 87.16 score, ahead of Canada’s Max Parrot and Mark McMorris.

“I can’t believe I got to land my run,” said Gerard, who came into the competition at the top of the world cup ranking. “Just to land a run would have been plenty for me and to get on the podium — but to get first is crazy.”

Now the youngest American man to medal at the Winter Olympics in nearly a century (since 1928), Gerard is also the youngest snowboarding gold medalist — period. (Since slopestyle snowboarding was introduced at the Games in 2014, an American has never not won gold there.)

“After I landed the second jump I was like, ‘Come on, don’t blow it on the last one, let’s just make it through,’ ” Gerard said.

“The wind was really bad and the first two runs it was pretty tough,” he said, “but we got a nice little break on the third and I’m just happy I got to land.”

While President Trump and Vice President Pence proceed to use severe rhetoric when discussing relations with North Korea, the governments of the two Koreas are continuing to take diplomatic steps to ease tensions that have existed between them for decades. The latest show of cooperation is a surprising invitation to the North Korean capital Pyongyang […]

Vice President Pence is continuing to follow Trump’s lead in dismissing any signs of possible diplomacy with North Korea. In the latest instance, he also proved himself to be a hypocrite when it comes to protesting at sporting events and showing respect to flags. On Friday, the opening ceremony of the 2018 Winter Olympics kicked […]

The 2018 Winter Olympics kicked off tonight in Pyeongchang, South Korea, with people trying to guess who would be lighting the cauldron with the Olympic flame. 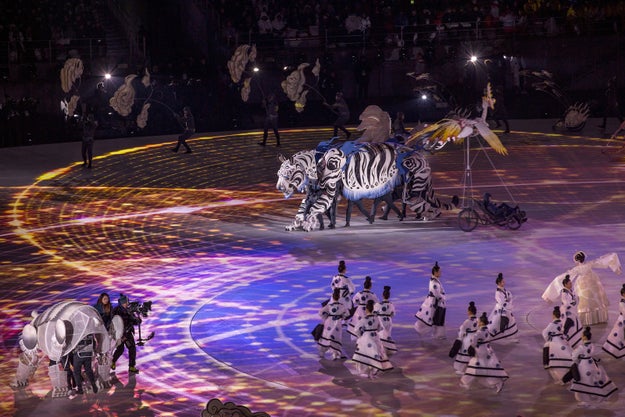 It turned out they were right! 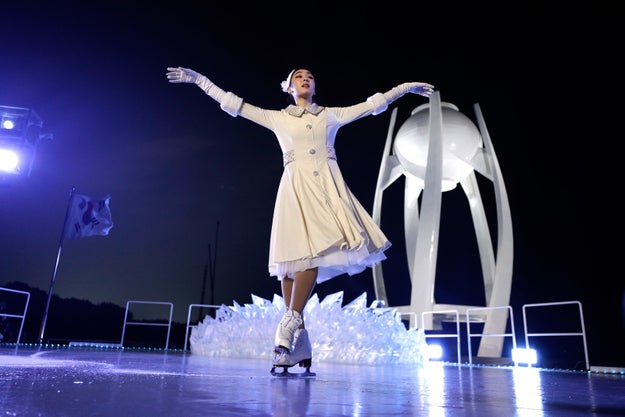 Kim — who retired from professional figure skating after the 2014 Winter Olympics in Sochi — appeared on an ice rink at the top of the stadium in her skates. 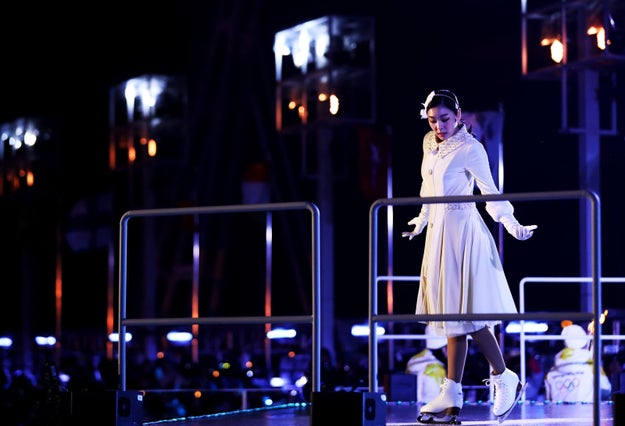 She performed a routine before proceeding to light the cauldron with the Olympic flame. 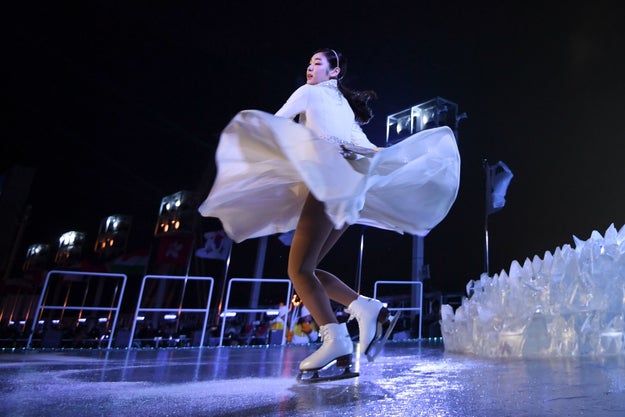 All while in her skates. 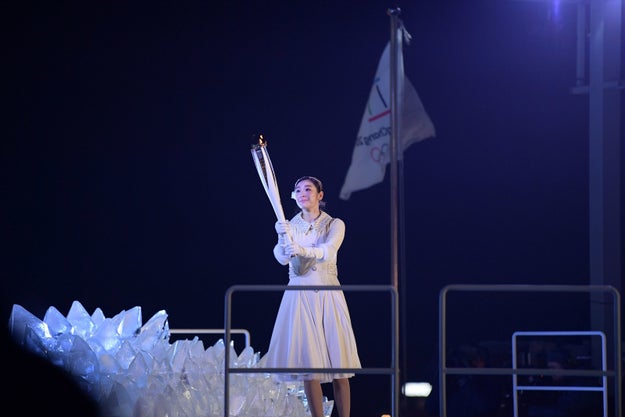 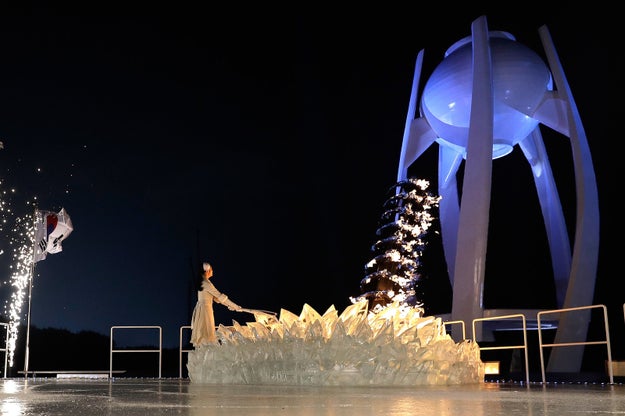 The sister of North Korean leader Kim Jong Un and South Korea’s president have shaken hands in a historic moment for the two countries during the opening ceremony of the Winter Olympics.