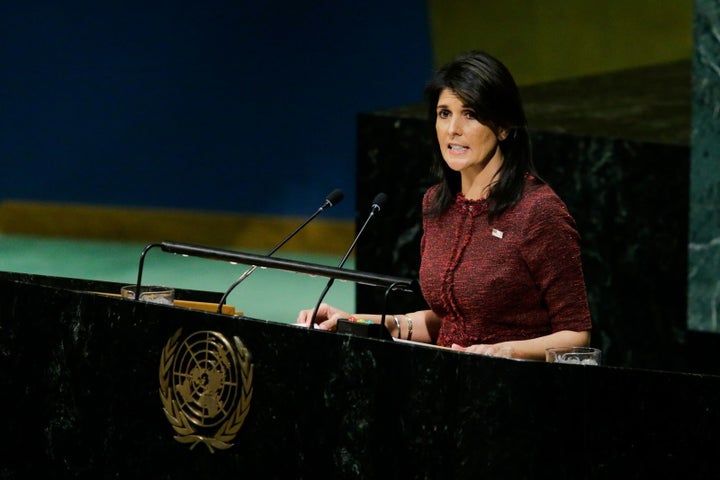 Donald Trump swore in December to withhold “billions” of dollars of US aid from countries that supported a United Nations resolution condemning the administration’s recognition of Jerusalem as the capital of Israel.

On Monday the Trump administration made public its proposed 2019 budget, and here's the news: not a single country lost funding on the basis of voting against the US at the UN.

In fact, the budget specifically carves out money for many of the countries that voted against the US in the UN General Assembly, such as Zimbabwe, Somalia and Nigeria.

“If you look at our budget it is focused on where we think the most appropriate assistance level should be based on where our security needs are,” Hari Sastry, the director of the Office of US Foreign Assistance Resources, told reporters at the State Department.

When pressed about whether any assistance was cut due to the vote at the UN, Sastry said “there’s nothing specific just tied to that because that is only one factor.”

Trump’s apparent lack of interest in following through on his own threat could cause foreign powers to doubt his sincerity when issuing ultimatums in the future, and the same goes for his ambassador to the UN, Nikki Haley.

In the run up to the December vote, Haley warned that she would be “taking names” of the nearly 200 member states voting on the resolution addressing Trump’s move to upend US policy.

“As you consider your vote, I want you to know that the president and US take this vote personally.” she said. “The president will be watching this vote carefully and has requested I report back on those countries who voted against us.”

Only nine countries voted with the US, while 128 voted against it. iAnd yet, the budget proposal specifically requests hundreds of millions of dollars for countries that voted against the US, including Nigeria, to support democratic governance and agriculture sector productivity, Somalia, to support “critical state-building processes” and “reduce corruption,” and Zimbabwe, for “promoting good governance” and “respect for human rights.”

The proposal allocates $41.17 billion for the International Affairs Budget, a bucket that includes the State Department and the US Agency for International Development. Advocates say that request amounts to a 30 percent cut to foreign assistance.

“That’s where our heads at. Not an overt mention of the UN vote,” said Christy Delafield, a spokeswoman for Mercy Corps, a global humanitarian aid agency.

In any event, the main battle for funding will reside in the halls of Congress which will merely view the Trump budget as a political messaging document rather than the outlines of an action plan.

Trump acknowledged Congress’s authority over the purse in his State of the Union speech, when he asked lawmakers to pass legislation limiting US aid to America’s “friends.”

But just like last year, Congress is already showing a desire to forge a budget that bears little resemblance to his request.

“A strong, bipartisan coalition in Congress has already acted once to stop deep cuts to the State Department and Agency for International Development that would have undermined our national security. This year, we will act again,” Republican Rep. Ed Royce, the chairman of the House Foreign Affairs Committee, said in a statement.

Rep. Eliot Engel, the top Democrat on the committee, promised that the proposal was “dead on arrival.”

Chelsea owner Roman Abramovich would be forced to shell out a staggering £26.7m severance pay to sack manager Antonio Conte, according to the Daily Mirror.

The former Juventus coach has come under fire in recent weeks with results leaving the Blues’ title defence in tatters.

Only last summer, the 48-year-old was rewarded for guiding Chelsea to the Premier League title with a new contract until 2021; nine months on and his side look a shadow of their former selves.

On Monday evening, Chelsea host West Bromwich Albion at Stamford Bridge as they look to avoid a third consecutive defeat in the league.

The West Londoners find themselves trailing league leaders Manchester City by a substantial gap of 19 points, having lost to both Bournemouth and Watford in the space of the last week.

Then in a weeks time, Conte will be gearing his side up for a huge Champions League last-16 clash with giants Barcelona, in a game which could potentially decide the Italian’s future.

However, with such a huge compensation fee Conte would be owed should he face the sack, Abramovich is reluctant to make a rushed decision on his future.

This afternoon, Conte spoke about his total focus on turning results around at the Bridge:

“I’ve not thought for one moment of the possibility of going away from this club.

My commitment and the commitment of my players is totally for this club.

A lot of time in football the manager and the coach depends on the result.

At the moment we are having a poor result. For this reason we have to pay great attention.

We have to try to stop this bad run and get three points against West Brom.

Every single player knows we have to try to improve the results and play better. Against Watford it was totally negative.”

A rule revived by the Trump administration gutting funding for organizations that perform or promote abortions abroad could cost Planned Parenthood around $100 million in funding, according to analysis by the New York Times. It’s the latest indication that White House efforts to hinder reproductive justice work are hitting the well-known non-profit health organization.

According to a State Department report on Tuesday, four organizations working internationally (along with dozens of their regional partners) have rejected rules reintroduced by the Trump administration requiring health care funding recipients to eschew any connection to abortion. The White House argues that number is relatively small — of the 733 organizations with funding up for renewal, the government says 729 accepted the new stipulations laid out by President Trump.

But those that opted out will be hit hard. While the organizations that declined to go along with Trump’s mandate remained unnamed in the State Department report, both Marie Stopes International (based in London) and the International Planned Parenthood Foundation have publicly said they will decline. According to the Times, Marie Stopes works in 37 countries and will lose out on $80 million, while Planned Parenthood, active in over 170 countries with 29 impacted by the ban, will likely see a $100 million loss.

The United States serves as the world’s biggest source of health funding, providing around $8.8 billion in global assistance annually. Officials said that money declined by the four organizations would go to others providing similar services, but were unable to speak to the long-term impact the funding stipulations might have globally.

“It is too early to analyze systematically what effect, if any, this will have on programming,” the report reads. “When a partner declines to agree to the policy and the department or agency reprograms funds to other organizations, the amount of funding directed to respective recipient countries will remain the same.”

So much for National Women’s Health Week.

The report was intended to measure the impact of a policy Trump revived shortly after taking office. The Mexico City policy, also known as the “global gag rule,” is a Reagan-era policy that bars international funding for any organization that offers abortion counseling or referrals, advocates for decriminalizing abortion, or offers abortion services. It has been revived and rescinded on a partisan basis: Republican administrations have typically favored it while Democratic administrations have not.

Reviving the policy has far-reaching implications. Currently, no U.S. federal funding can be used to fund abortions under the Hyde amendment. Another piece of legislation, the Helms amendment, prohibits international groups from using U.S. funding for abortions. The global gag rule goes a step further, preventing organizations from using separate funds in countries without restrictions like those in the United States.

Unlike past Republican presidents, Trump has expanded the rule to include all U.S. global health assistance, as opposed to reproductive health efforts alone. Typically, the global gag rule impacts around $600 million in funding. But Trump’s decision to bring the policy back on his first working day in office impacted nearly $9 billion in international aid. The Kaiser Family Foundation has estimated some 1,275 foreign non-governmental organizations could be impacted by the policy.

A number of studies have shown that international funding for abortion is crucial. Around 42 million people worldwide elect to have abortions annually and nearly 70,000 die as a result of abortions performed without appropriate safety measures. The global gag rule exacerbates those statistics: in many countries, pregnant people are twice as likely to have an unsafe abortion when global funds are restricted.

Historically, the policy has backfired: When the gag rule was last revived under President George W. Bush, abortion rates actually increased in Sub-Saharan Africa. The policy’s revival has also shuttered clinics across developing areas around the world, leading to restricted access to HIV/AIDS prevention and treatment, along with trauma counseling for survivors of rape. One Kenyan health clinic described the global gag rule as “a death sentence” for those seeking care.

Those statistics have done little to slow legislators who take issue with safe and legal abortion services — especially those provided or funded by Planned Parenthood. The organization has long been a favorite target of conservatives and the Trump administration, who have sought to defund all of its health care efforts, including HIV tests, STD screenings, pelvic exams, and general health services. While he has waffled on his stance towards the organization, Trump has repeatedly worked to gut Planned Parenthood since taking office, inserting provisions in his Affordable Care Act repeal bill last March, which would have stripped the non-profit of funding, in order to appease ultra-conservative Freedom Caucus members.

Arguably no policy under Trump has targeted the organization more than the global gag rule. At the time of the policy’s revival in 2017, Planed Parenthood joined a coalition from a wide range of sectors in criticizing the decision.

“When in place, the negative impacts of the global gag rule have been broad and severe: health services have been dismantled in a number of communities; clinics that provided a range of reproductive, maternal, and child health care, including HIV testing and counseling, were forced to close; outreach efforts to hard to reach populations were eliminated; and access to contraceptives was severely limited, resulting in more unintended pregnancies and more unsafe abortions,” the coalition wrote in a letter.

Planned Parenthood’s international office has not formally responded to the State Department’s report. Spokespersons for the organization did not immediately return a request for comment.